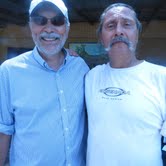 My name is Tim Conrad. The photo is me (on the left) plus a friend I met on the Arizona/Mexico border (but more about that later). I teach English at Weber State University. I love Ogden, Utah, and live next to the River Park Trail on 16th Street which now almost completely circles the city so I can walk or bike without having to worry about traffic or busy streets. I like to bike to school as often as I can. I’m on the university Personnel Relations Committee, which tries to collaboratively resolve disputes with faculty and staff, but the RB Committee has been my favorite of all for many years: the Round Ball basketball club, faculty and staff who play pick-up games on Tuesdays and Thursdays at noon.

I enjoy a variety of activities: movies, biking, reading, writing. I’m very interested in applied linguistics, studying ways to learn English and other languages in both writing and speaking. I’m continuing to write a book on this topic but so often get delayed because of my teaching and other interests and projects. My wife and I love to travel and in recent years we have been exploring the Sonoran Desert in southern Arizona and northern Mexico. In fact, we both recently taught at Desert Shadows Middle School in Nogales, a friendly Mexican border town, 80 kilometers south of Tucson, the only U.S. highway marked that way, instead of miles. In our spare time we have volunteered for “Los Samaritanos” and “No More Deaths,” patrolling the desert trails, providing EMS support, and maintaining water drops for travelers who have lost their way, sometimes having been abandoned, robbed or even abused by corrupt Coyotes who supposedly act as professional guides.

I was born and grew up in Northern Oklahoma in Ponca City, an area where people belonging to the Ponca Nation reside. In fact, Oklahoma is the state where many Native Americans from the eastern part of the United States were forced to relocate after their homelands were taken away from them in the 1700s and 1800s. My parents worked at a Ponca secondary boarding school called Chilocco, and when I was born, their Ponca friends gave me the name of one of their Ponca chiefs, “Eeahskaw,” which means “Great White Rock” (because I was a little white boy). So I have a lot to live up to! Later my parents transferred to a Navajo boarding school in Brigham City where I went to Box Elder High School, afterwards completing my undergraduate and Master’s Degree in the nearby city of Logan at Utah State University. I played baseball for the Box Elder Bees, the Brigham City Peaches, and in the LDS Church Softball League in Logan–our team was called “the Baptist Ward” because we were the only other church team in the league. While getting my doctorate degree, I lived in a college town named Indiana, not far from the city of California, a few miles from a little town called Oklahoma, all in the same state of Pennsylvania!

Many people have served as very special models and mentors in my life. Definitely, my parents “walked in beauty,” something their beloved Navajo students and families believed was important in their culture and religion, a philosophy of life based on living in harmony with nature and one’s neighbors. My parents showed me how exciting it is to learn the languages and lifestyles of other groups of people. They also modeled a life of both joy and concern for others as emulated by Samuel Worcester (defender of the Cherokees) and Chief Seattle, who couldn’t understand how anyone could think the beautiful Pacific Coast rivers, lakes, beaches, trees, wildlife and land could ever be bought or sold. I studied Spanish with the dramatic, inspiring Bolivian, Dr. Jaime Cantaravici, at Utah State University, and often like to share his challenging poems, translated into English, with my classes at WSU.

I’ve always wanted to make a difference in my personal and professional life. I’m excited about the world we live in. I think that we are living in a time of great possibilities and new discoveries about the nature of our world and the universe. Too often in the past the world has been plagued by superstition, ethnocentrism, competitive nationalism, and war. We’re beginning to understand ever more clearly our common humanity as citizens of an interdependent earth. In the United States, after many past mistakes, we’re beginning to live up to the words of our own founding document and work together to create a better government which recognizes that all are created equal and “endowed by their Creator with certain unalienable rights, that among these are Life, Liberty, and the Pursuit of Happiness.” It’s true that there seem to be so many obstacles to making a difference about the big problems we face in the world. But what if I can do something? Find someone who also wants to try? Who knows? As emeritus WSU historian Jim Dolph still reminds me, “Maybe an idea or plan might not work, but what if it does?”