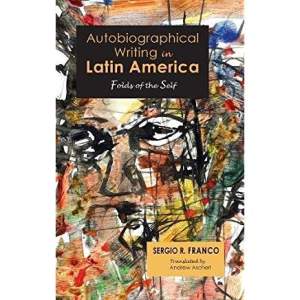 Sergio R. Franco researches and writes about contemporary Latin American literature at Temple University and has published a new book: Autobiographical Writing in Latin America: Folds of the Self. The Spanish version, Pliegues del yo, was awarded a 2017 Premio Iberoamericano by the Latin American Studies Association. The author sees autobiography as inter-connected processes of self-writing, Western subjectivity, and the Latin American experience: “the unfolding of social and ontological personality [the nature of being] through which a person becomes who he or she is.”

He explores autobiography not only in its traditional genre as people telling their life stories, but also through modalities he refers to as “avatars” of the writing of the self: “causeries, diaries, memoirs, and reminiscences of various kinds.” For example, the causerie, from the French word for talk or chat, is a unique form of personal reflection, like the Latin American tertulia, where writers informally meet in a bar, coffee shop, or someone’s living room to talk about their work, literary observations and experiences in open-ended, unfinished ways. We observe this in written form in El Libro de los Embraces, in which Uruguayan writer Eduardo Galeano tells curious stories about his own experiences and the people he encounters throughout Latin America, such as Fernando Silva, the director of a children’s hospital in Managua, Nicaragua, who was walking out of the hospital late at night on a Christmas Eve when he noticed that a sick boy near death was following him and reaching for his hand, then whispering up to him, “Tell someone . . . tell someone I’m here.”

Four chapters develop this theoretically pluralistic analysis of Latin American autobiography. Chapter One questions why autobiographical discourse emerged in the continent, and why anyone would want to read another’s autobiography. To answer this question, Franco suggests that an audience base gradually increased, motivated by curiosity, aesthetic interest, or the longing for self-recognition when identifying with an author’s life story. He touches on the indigenous origins of Peru’s Comentarios Reales, stories told in the early 1600s by Inca Garcilaso de la Vega, the illegitimate son of a Spanish conqueror and royal Inca mother. Women including Sor Juana Inés de la Cruz of Mexico were also early contributors to the genre, disguising their complex self-expressions in confessional forms acceptable to the Church. Other possible reasons for the emergence of autobiographical writing include a return to individualism, the renewed importance of the author, opportunities to sell one’s stories, contemporary narcissism, and the desire for self-examination.

Chapter Two describes how autobiographies often dialogue with photography, using the example of a photograph on the dust jacket of Vivir para contarla, the autobiography of Gabriel García Márquez that depicts the highly successful and famous author as a sweet, innocent one- year old child. Consequently, readers may subconsciously transfer those qualities into their interpretations of the text of Marquez’s story. There are two other ways that Franco shows how photography combines with text to produce meaning: by serving as a “supplement to writing” or as “a comparison between the photographic act and the act of writing.”

Chapter Three extensively reviews the “precocious autobiographies” of young Mexican writers, a unique project carried out from 1966-1968 for the purpose of getting new writers to narrate their lives in short texts.

Chapter Four examines from multiple angles the famous diary of Peruvian Julio Ramón Ribeyro called La tentación del fracaso [the temptation of failure], and its varying purposes, topics, themes, and expressions. Ribeyro’s diary becomes both a writer’s notebook through which he experiments with many modalities of self-expression as well as a collection of unique life experiences and observations. In fact, the diary has become a unique literary product in its own right.

Franco’s well-researched book, Autobiographical Writing in Latin America: Folds of the Self, enhances our understanding both of autobiographical writing in the Latin American experience and of how the genre is influenced by authors, readers, and the forces of Western subjectivity. Missing from Franco’s research are the rich contributions of autobiographical Latino writers in the United States such as Francisco Jimenez and his series of America’s Award winning books, beginning with Cajas de Cartón [Cardboard Boxes], often compared to The Grapes of Wrath, telling the stories of his elementary, high school, and college years as he and his family follow the agricultural circuit from Mexico through California, negotiating complications of language, culture, class, and the demands of an agribusiness economy. Jimenez helps us to appreciate, much as Franco describes in his anthological analysis of Latin American autobiography, how personal and social forces shaped the voice and identity of his understanding and self-writing.